it’s the 8th day of the 12th month, and time to show all heARTists some love. arrigatou gozaimashita for your past support!

we apologize but, due to our busy schedule, we’re moving to a quarterly posting. with all the activities going on with our War Brides of Japan docu*MEMORY, our time is so limited.

an important part of Japanese history, geisha continue to maintain important aspects of Japanese culture. as entertainers, they’re responsible for keeping alive the playing of instruments like koto and shamisen, and certain traditional songs and dances. in the War Brides of Japan docu*MEMORY film, one of our participants shares information about geisha and the story of her own mother as an entertainer in Little Tokyo, Japantown, Los Angeles.

here are a couple of promo trailers we’ve recently created for the film:

no matter how many times you knock him down, daruma always bounces back:

below are the usual links to everything you want to know about the film: 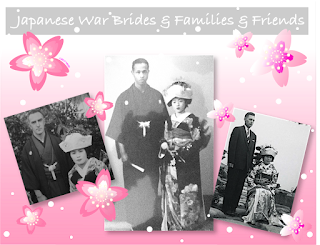 please stay updated about at our website at www.warbridesofjapan.com

happy holidays to all our readers! until we meet again on March 8, akemashite omedettou gozaimasu!

Posted by warbrides ofjapan at 6:42 PM No comments:

home is where the heART is

it’s the 8th day of the 9th month and time to celebrate Yuriko’s heARTwork.


one of the best ways we’ve been doing that is by making a docu*MEMORY about Japanese war brides like herself. and, we’re very close to premiering that film for you.

during filming, we heard stories of how most Japanese war brides were unable to return to Japan to see their families for nearly a decade. back in the 1950’s, air travel was costly, rare and inaccessible for most brides married to low-salaried US military men. imagine how much you would miss your country, culture and family after spending dozens of years away from them.

in the photo above, Yuri visits her mother in Tokyo in 1965.

here’s a piece she painted of a farmhouse. although it depicted neither the home she grew up in, nor the home she later lived in, it carries the essence of family and home to her. 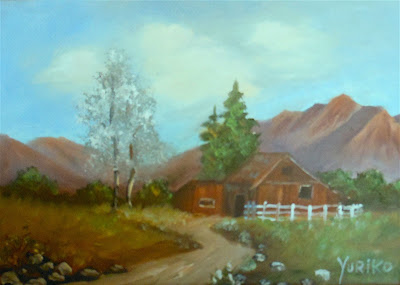 please take a look at the trailer we created to promote the War Brides of Japan docu*MEMORY.

the best way to keep updated about our film project is by checking our website at www.warbridesofjapan.com, and following the links below.

good fortune to all our readers until we meet again on December 8.

Posted by warbrides ofjapan at 5:45 PM No comments:

off the grid with iAmArtistYuri

it’s the 8th day of the 6th month and we’re getting very close to completing our War Brides of Japan documentary film.

in fact, we have a new website at: www.warbridesofjapan.com

meanwhile, here are two of Yuri’s more experimental styles of artwork. while she mostly loved painting landscapes, seascapes, animals and flowers, every once in awhile, she went off the grid.

also, check out the links below for more about the film.

links to the War Brides of Japan documentary film:

in fact, last quarter’s blog, directly below, contains some excellent information about what you can expect to see once the film is available for screening.

until September 8 when we meet again, we will always be… 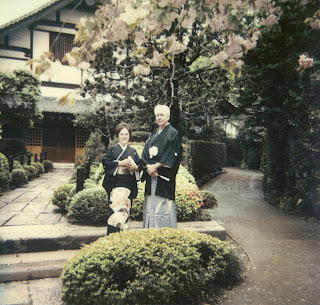 Posted by warbrides ofjapan at 9:15 PM No comments:

it’s the 8th day of the 3rd month and time to celebrate International Women’s Day around the world. while we do so, let’s also remember our pioneering war brides from Japan.

after interviewing several brides last year, many of their children, some of their grandchildren and even one of their great grandchildren, i have come to admire the amazing accomplishments of these women—Yuri the heARTist included.

first of all, to meet, fall in love with, and marry a man who was a former enemy who helped bombed their country and possibly killed or maimed their loved ones, these women were able to find within themselves the capacity to forgive. they also embraced hope by becoming involved with foreign men despite incurring the wrath of their relatives—some who disowned them—and being shunned by other Japanese who saw their marriages to Americans as an act of disloyalty.

some Japanese women had relationships with military men who abandoned them and left them to raise mixed race children alone. in the mono-racial society of post-WWII Japan, it was very difficult for a gaijin or outsider to find acceptance, especially a child who looked different and served to remind Japanese they had lost the war.

for the Japanese women who married American GI's, it was challenging to move to America during Jim Crow and segregation. at the time, 16 states still upheld anti-miscegenation laws forbidding whites to marry anyone other than whites.

Japanese women who married African American men became 'black by default' and were denied housing, dining out privileges and other recreational activities reserved only for whites.

most brides spoke broken English and were discriminated against by store clerks, cashiers and others who held anti-Japanese sentiment because of WWII.

many Japanese war brides lived in isolation if they weren’t in dependent quarters on military bases. often, these women were the singular war bride in their neighborhood, the only one in an interracial marriage, the lone Asian and always the only person of Japanese ancestry where they lived.

with no long distance calls back then, nor daily flights overseas, war brides resorted to writing letters back home. many were homesick for the culture they had grown up with and for the foods they had eaten which were not available in most of the US.

yet these women persevered, creating families and holding jobs, often sharing knowledge of Japanese culture with others in their environment. to those wonderful women, we have created a documentary film that honors them just as we honor all women on this day.

as for Yuri, please enjoy the art she created seen on this blog post. as an artist, poet, dancer, chef, tailor, gardener, mother and wife, she embodied the spirit of the ever achieving Japanese war bride.

links to the  War Brides of Japan documentary film:

Posted by warbrides ofjapan at 7:22 PM No comments: